BIG thanks to Cindy Callinsky at Rear View Mirror for the guest blog!

Her blog is pretty cool! Spend some time on it and be sure to check out her book, Rear View Mirror. Getting GREAT reviews! 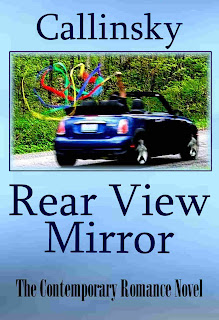 If you’ve ever wondered what it would be like to run sound for a rock-n-roll concert, EKKO will place you in the drivers’ seat and step on the gas.
The series is based on a rock band that has just started a major tour across North America. But this isn’t your typical sex, drugs, and rock-n-roll story; it’s all about the adventures of CJ, our protagonist, who has a hunger for paranormal adventure.
After a hike in the forest one day, CJ returned with a device that has taken his craving for the unknown to a whole new level. He lost his parents at an early age and since then he’s searched the paranormal world hoping to find them. Now that he has a way to cut a few corners, he dives headfirst into the unknown. What he discovers is a blessing in disguise.
The rock band hits the road and the dynamics of a working tour start to unfold. As with any working environment, a road tour also has its share of egomaniacs and dysfunctional personalities. Each man has a job to do and keeping up with the pace is tough enough, but things get really interesting when CJ starts throwing some paranormal curveballs into the mix. The result is a heaping plateful of mayhem served on stage via sound and lights.
As the tour progresses, CJ goes to extreme measures to find ghosts because he’s discovered a way to incorporate the phantoms into his stage shows. The concertgoers can’t get enough of it. So much so that news is spreading fast and ticket sales are starting to soar. Now that everyone thinks he’s added holograms to the show, the media is pounding on the door for an exclusive. As if that weren’t enough, the mind-bending shows are starting the draw the attention of record moguls as well. Seeing this as an opportunity to cash in on someone else’s idea, the music executives quickly send out the spies.
Trouble is, CJ has his hands full searching for ghosts and even after he finds them, they’re not always easy to persuade. In order to make sure each stage show is over the top, he finds himself wheeling and dealing within the spirit world. The hair-raising adventures begin to tarnish his credibility and rumors start to spread.
Noticing that CJ always has an excuse for not being around at certain times, CJ’s assistant is starting to see a pattern. He develops a rancid jealousy, which only feeds his craving for power. It doesn’t take long before he, too, starts plotting against CJ.
In spite of the paranormal battles and the crumb-snatching spies, and even after he sends the media on a wild goose chase, CJ still has a job to do. Since his one true love is sound and lights, he’s determined to keep it all together.
Or does he?
Posted by Unknown at 4:55 PM