Book one, EKKO White Limousine,
is in development for a film!

The screenplay is being written by Lupi Pictures and we’re anticipating a reading by December 10, 2015, narrated by a group of professional actors here in NYC. It’s been an interesting endeavor and no small feat for the writers, but as many of you have said in the past: EKKO would make a great movie. Thank you for the encouragement.

We had originally planned on making a BIG deal of this, but as many of you know first hand, a film option doesn’t always mean a film will be made. Now that we're three months into the contract, we feel it's appropriate to share the exciting news with you. So please join us in supporting Lupi Pictures with thanks and encouragement until the screenplay has been completed. I think it goes without saying, we’re anxious to see how this first chapter plays out.

So … in light of this great news, we thought it would be a terrific time to shamelessly plug the Trilogy with an exceptional deal.

Give the gift of imagination this Holiday Season with … 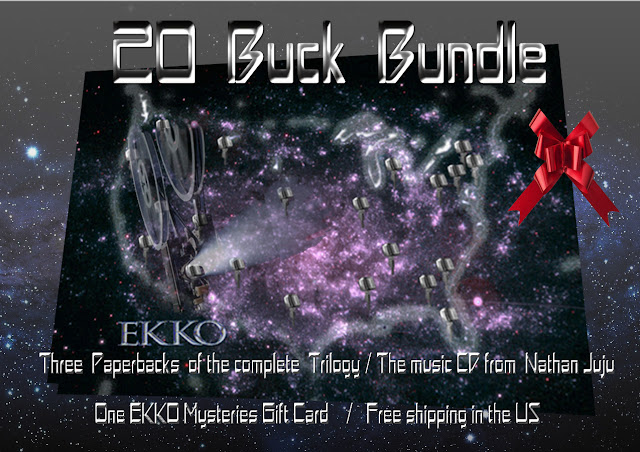 EKKO is a dynamic story filled with adventure, music, fun, and lots of clues for those puzzle-solving readers.

CJ may be one badass soundman, but can he really juggle the needs of the spirit world while running sound for a major rock band? Can he fight off the evildoers? Will the record moguls unveil the secret behind CJ’s Blue Violin? Can an ancient love be resurrected?

As one reviewer stated:
“EKKO is perfect for people who like reading for fun.”
There ya have it.
Now … this is very important:
Be safe in your travels as you roam the country, and among all other good wishes, we want you to EAT, DRINK, and BE MERRY during the 2015 Holiday Season!
Sending our best to you and yours, and as always,


Thank You for your support!
Posted by Unknown at 4:22 PM