For those of us with dogs, we have our hands full dodging the dangers of this stretch of park, and those dangers aren’t the typical assaults and thefts you might assume, but from the park itself.

since Sandy hit our shores several years ago. A polite answer, yet the gardeners here pay no mind to this plant.

Round Up: If we’re lucky, we happen to see a paper sign that’s been taped to a rock wall or fence that indicates poison has been used, though we’re not sure where because one random sign doesn’t seem to match the areas where we witness employees spraying, meaning many areas are not marked at all. Many a dog owner has learned to recognize sickness in their dogs that coincides with the roundup, or better yet, a Monsanto pesticide that is carelessly sprayed throughout the park. Dog owners in our area have lost their furry friends to illnesses they can’t explain, and many notice diarrhea and illness in their dogs after eating grass that grows along the paths, where paper signs are not posted. 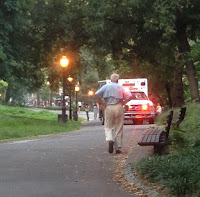 Bicycles. We have hills here, and it’s a cyclist’s playground. Problem is the cyclist’s whiz by at ridiculous speeds, always choosing to whip in-between crowds and people with dogs on leashes. But a cyclist can’t always see a leash and we’re often caught off guard, and that means we’re forced to drop the leash, grab our pets, or jump away in a quick response to a speeding bicycle. To say this is life threatening for the dogs is a no brainer, but it’s threatening to humans as well; humans that have been taken away in ambulances after being slammed into by kids on bicycles. We understand Mayor de Blasio doesn’t believe children should begin their life with a record, so we’re told that nothing can be done, an answer that would seem to come from the White House instead of a local park. Sadly there is one little girl who was slammed into by a young cyclist, who, last reported, has brain damage from the impact. I can’t help but wonder which life-path Mr. de Blasio chose for her. 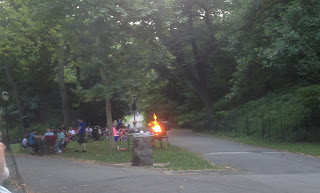 Johnny Walker is a NYC resident and avid animal lover.